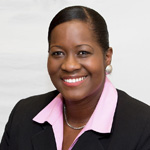 Geva Dublin is the Educational Director at our Logan Street Center in the East New York section of Brooklyn. Born in St. Vincent and the Grenadines, she migrated to the United States in 1989 and began her Early Education teaching career three years later in Manhattan’s affluent Upper East Side neighborhood.

“I was in awe of the wonder and excitement that the children possessed,” she recalls, “and I knew then that this was my calling … that I wanted to work in this field that would allow me to interact with the children on a regular basis. This was the formative experience that fueled my passion for early education and inspired me to pursue a degree and a career in Early Childhood.”

In 2004, Ms. Dublin enrolled at Medgar Evers College of the City University of New York (CUNY) as an Education major, graduating four years later with the Bachelor’s degree in Liberal Arts and Education. Almost immediately, she moved on to graduate school at CUNY’s Hunter College, where she earned the Master’s degree in Early Childhood Education.

In May of 2013, she was appointed to the post of Director at our Friends of Crown Heights Logan Street facility.

“My primary goal is to inspire teachers, parents and students in all aspects of their lives,” Ms. Dublin says. “My educational philosophy is that I strongly believe children are best educated when they are actively and rigorously engaged in their own learning process.  I also believe each child has the ability to learn, regardless of their educational differences. My ultimate goal is to ensure that each child is thoroughly enriched in all aspects of their overall development by the experience of having been a part of our Friends of Crown Heights educational community.”

Each year, Americans observe National Hispanic Heritage Month from September 15 to October 15, by celebrating the histories, cultures and contributions of American citizens whose ancestors came from S…
[ continue ]

The U.S. Hispanic population has grown significantly in the last decade, from 50.5 million in 2010 to 62.1 million in 2020. Hispanics accounted for 51% of entire U.S. population growth during that per…
[ continue ]

Black Americans have played a crucial role in helping to advance America's business, political and cultural landscape into what it is today. And since 1976, every U.S. president has designated the mon…
[ continue ]